Who is Clive Barker? 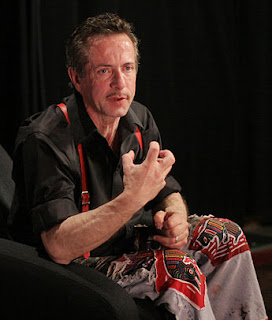 Pinhead is most undoubtedly Barker's most universally renowned creation, featuring in his most successfully adapted franchise Hellraiser based on the novella The Hellbound Heart.
A super multi-talented guy: Writer, Screenwriter, Artist, Director and the list goes on.
But what is it you don't often get to read about Clive Barker? And that is his esoteric biography.
Who is the man behind the macabre? 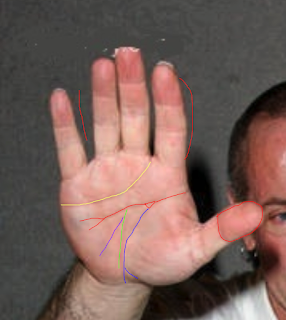 The head line (red) and life line (blue) both are attached for a long time, until the late 20s, showing a circumspect person. He likes to stick to a timetable, one which he established early on in his life. The triangle forming at the separate of both of these lines indicates an achievement borne out of effort and not luck. This triangle forms at about 27 and ends at 33. He must have begun writing fiction in his late 20s after being influence by a muse or someone international if you see the influence line (purple) entering his fate line (green). It was not until the publication of his six-volume Books of Blood in 1984 that he would gain international recognition at the age of 32. In 1985 he published his first novel The Damnation Game to critical acclaim.

Barker prefers to work with the same people (Doug Bradley who plays Pinhead) as many combinations on his palm show him to be a traditionalist. 1. The longly joined head and life lines. 2. The fate line (green) staying close to the life line (blue) for a lengthy duration showing his fondness for his home country.
The life line also seems to go back towards the Venus mount at the end showing he will spend the last 20-30 years in his hometown.
What's amazing is that though his work is full of imagery he approaches his work with utmost practicality given the straight head line ending in a writer's fork but with both prongs staying mostly straight showing a head ruled by logic though the second prong is going a tad downwards.
He is a romantic man and very expressive given his heart line (yellow) is swinging upwards at the onset. Though he has three long-lasting relationships, he is a good judge of character, given his heart line starting between Jupiter and Saturn.
The Jupiter finger is bent showing he might become tyrannical if given too much power over a large group of people. The space between the ring finger and the pinky shows an independent outlook on politics, religion and other major aspects of society.
The thumb is normal showing a balance between leadership and non-leadership. The upper phalange is blunt showing he lacks a bit of diplomacy, and though he is rarely angry, he could lash out very dangerously given the bluntness of this top part of the thumb. 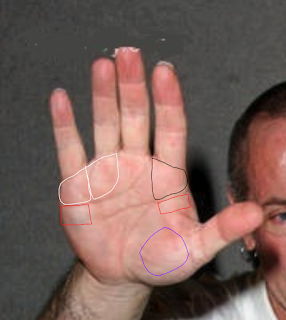 Venus (purple) near the thumb shows his passion for the arts and also life in general. The Jupiter (black) mount under the forefingers shows his authority in the literary community. The joint developed of the Apollo and Mercury (both white) mounts show that he is talented in both the making and selling of art. The Mars mounts (both red) are the most developed regions on his palm showing his drive, and that no matter what happens to him, he won't give up on something as long as he is passionate about it.
He also has a high sex drive and would want a partner who is also sexually active. Apollo and Venus, when both are developed, they make the person very good looking, and it's no surprise that Clive has the looks of an Olympian. He could have succeeded as an actor if his passions lied in performance.

I hope you enjoyed this alternate look at Clive Barker's life and times. He is a very passionate man but keeps his cards close to his chest. The 20s to early 30s era of his life shows that he was and still is very close to the people he worked with in his co-founded theatrical troupe in England. Starting as a local playwright who would've known he was bound to become one of the most internationally recognized British authors of the 20th and 21st centuries.

Fate Line from Mount of Moon

May 05, 2022
If the Fate Line on your hand arises from the mount of Moon and moves onward to the mount of Saturn below the middle finger without hindrance, it manifests that: Your destiny is subject to great ups and downs and sharp fluctuations. At one time, you may climb high up to the pinnacles of glory, and at another, fall flat into the pit of ignominy, frustrated and broken-hearted. In many respects, your destiny is very similar to that of the moon which continues to change its shape and course and pass through periods of light and shade. As such, there is little possibility that you would ever stick to one place, job or career and lead a stable and comfortable life throughout. Uncertainty, instability and suspense are peculiar characteristics of your destiny. Wealth, power, happiness, fame or success for you will be like a fleeting shadow, varying in extent, size and duration. One day, you might be rolling in wealth and the next day be an empty-handed wreck, running into heavy debt or loss.
Post a Comment
Read more

July 20, 2021
From Ancient India, the three main spheres of fortune telling are still being read today. Everyone asks where do I start? Astro-Palm-Numero explains all the basic details with finesse, and gives a proper introductory start for both experts and beginners alike in the domains of Astrology, Palmistry and Numerology. About the Author: Nisar Sufi is an underrepresented author from South Asia who is currently fully employed as a content writer in his home country. He has 11 years of experience as a fortune-teller and is currently ranked 3rd in Pakistan in the Palmistry Rankings on Fiverr. Simply search “Know Thy Future” in any search engine and you will come across his many fortune-telling related endeavors including his Fiverr Profile, YouTube Channel, Articles on Divination, etc. Astro-Palm-Numero is his first book on his favorite subject. Astro Palm Numero by Nisar Sufi - Links: Available Here: Amazon:  https://www.amazon.in/dp/1636402445 Flipkart:  https://www.flipkart.com/astro-palm.../
Post a Comment
Read more