The line which usually travels vertically through the center of the palm from the bottom upward, is called the Line of Fate. 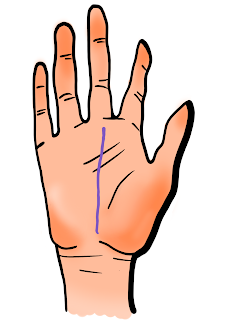 This line, in fact the end product of all that may be available after plus and minus from what the other lines and signs of hand have to offer. It is, undoubtedly, the most mysterious and complex of all the marks requiring great skill and dexterity and a high sense of responsibility to be interpreted. Any hasty generalization may do incalculable harm to the client and bring a complete disillusionment to the reader as to the validity of this knowledge.

While the other lines on the palm highlight, primarily the mental or psychological make up of a person, the luck line is concerned mostly with destiny, interpreted commonly in material terms. Thus, if a person has a long, deep and well-defined luck line, free from cuts, breaks, islands or any blemish, they might be considered financially well-off, hence, very lucky. But such a definition is rather too narrow and superficial as it does not comprehend whether a materially well-off person is inwardly happy too.

As a matter of fact, this line, regardless of the external status, is a mark of contentment and, as such, a man with average means but good job adjustment and happy state of affairs may have it in good shape while a wealthy man with mental worries, health problems, an unhappy marital life or lack of job satisfaction might have it in bad shape; crisscrossed, broken, or islanded.

Traditionally speaking this line has been associated with the role which the element of fate or destiny plays in human life. It would, however, be wrong to presume that it has nothing to do with one's own doings. Indeed, the lines and signs which reveal one's personality traits too and vice versa.

It may be pointed out further that though this line provides some misty clues to the future, it would be indiscreet to give wild predictions and pronounce judgments on people's destinies as most of the traditional fortune tellers are used to doing. A scientific hand analyst, in the writer's opinion, presents a rational and logical views of all fate related material in human hand.

While acknowledging that no one can comprehend the mysteries hidden in the womb of time, with absolute certainty, except God the Almighty, they proceed to present character-based reading of all the lines and signs including those pertaining to fate; and predict thereby the clients' future; maintaining that, what we commonly call luck or destiny, is nothing imposed from without but something emerging from within man,. As such, an individual, endowed with positive outlook, good capacity to cope with life's situations and sterling qualities of head and heart, possesses a well-defined fate line hence a person of destiny, while an individual possessing negative traits and unwholesome tendencies, has a crisscrossed, broken and defective fate line; hence ill-starred and unfortunate.

Here are some further points on the Fate Line: 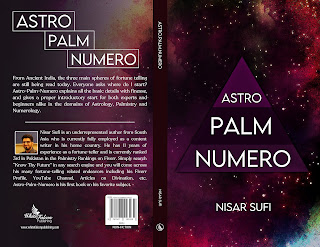 From Ancient India, the three main spheres of fortune telling are still being read today. Everyone asks where do I start? Astro-Palm-Numero explains all the basic details with finesse, and gives a proper introductory start for both experts and beginners alike in the domains of Astrology, Palmistry and Numerology. - Description on Amazon
Available in both digital and print formats.
Grab a copy by clicking here

August 14, 2021
Who is Mukesh Ambani? Mukesh Ambani, as of August 15, 2021, is both the richest Asian and the richest Indian on the planet. He is the son of business tycoon, Dhirubhai Ambani, so of course Mukesh comes from money but there is no doubt in my mind that he would have become rich on his own merit despite his colossal inheritance. Read on further below to find out the reasons behind this statement. However, the above text reading offers only a glimpse into the Richest Asian and Indian’s mindset. For an even more detailed insight into Mukesh’s personality please visit the links below: Mukesh Ambani Palm Reading Video (English) Mukesh Ambani Palm Reading Video (Urdu) CLICK HERE FOR A PALM READING
Post a Comment
Read more

Meaning of The Mount of Venus

January 10, 2022
The elevated fleshy pad located just below the thumb, and forming part of it, is called the Mount of Venus. When the life line, taking a full curve around it, covers a fairly wide are, the mount is said to be well-developed, manifesting Venusian qualities. Whether the term "Venus" used for this mount has been borrowed from the planet Venus or from Greek mythology it is not fully known. There is a greater probability that this has been borrowed from Greek mythology according to which Venus is the goddess of love and virility.  If Venus is your mount, you are likely to possess the following psychological traits: 1. You are inclined to be very loving, friendly and sympathetic. The capacity for formulating human relationships is immense in you. 2. Being gregarious by nature, you are prone to love friendly gatherings, festivities, fun fairs and social functions. Your range of friendship and social contacts would, naturally be very wide, transcending geographical limits to include
Post a Comment
Read more